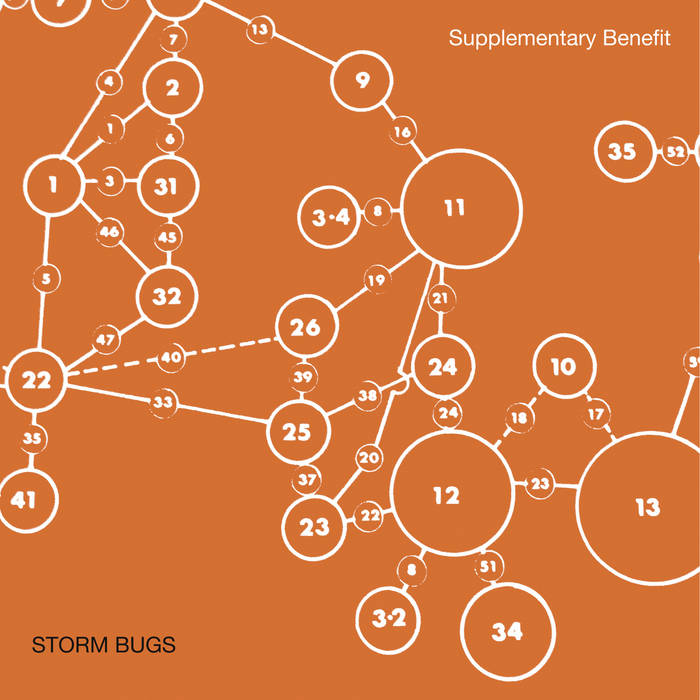 An extremely satisfying and coherent spin, this excellent LP compiles some of the finest Storm Bugs work released on vinyl and cassette during 1978- 1981. Some of the cuts have appeared on that previous CD compilation Let's Go Outside and Get it Over, but this LP scoops the prize for being more comprehensive and complete, and laying out the songs in a meaningful order. It also follows a schema of sorts – side B contains all electronic music, side A represents the 'clunky bedroom' side of the duo, Philip Sanderson and Steven Ball.

The 'Table Matters' EP was released on vinyl by Loop Records in 1980; it's five tracks of edgy, clattering mayhem, made with a combination of electronics, radios, guitars, tape loops, percussion and much more. Effectively a Sanderson solo set, this EP displays wild and rugged invention compressed into short bursts of electrifying genius; four of the cuts are only two minutes apiece. Using found spoken word tapes and warped voicings, Storm Bugs deliver something that is not so much a critique of consumerism, as a semi-nightmarish distorted view of shopping in England in 1980, replete with Kwik-Save signs, shoddy goods, and futile attempts to keep customers happy. ‘Table Matters’ is almost their Santa Dog; it's a perfect cryptic statement, almost inexhaustible in content, transpires in less than 15 minutes and leaves you feeling troubled for days. Great!

We also got both sides of the 'Car Situations' single, of which the flipside 'Tin' is something Sanderson refers to as pseudo-rockabilly using a percussion loop arrived at by very devious means. Yet 'Tin' is as catchy a pop tune as they ever recorded, with some delightful guitar riffing from Ball.

Side 2 of the LP features six examples of their work with the VCS3 synth, the Sythi-Bug, and short-wave radio; these are rescued from cassettes released on Sanderson's Snatch Tapes label, including Dark Cuttings, Gift, Storm Bugs and A Safe Substitute. Generally longer than the 'poppy' material on the first side, these extremely strange instrumentals give the impression of something infinite and endless, cautious explorations made across foggy and unknown territories. Both 'Hodge' and 'Blackheath Episode' are exceptionally strong experiments in electronic music, but by the time you're stranded in the middle of 'He Rose Up Again', you will be feeling almost dizzy with the doubt, fear and sheer bewilderment that seems to be embedded in every minute of this music. Ball's abstract scrapy guitar work on 'Hiemal (And She Blew)' is most notable, and it's a shame there aren't more examples of that metallic guitar noise combined so effectively with the VCS3 work; it's one of those rare moments when the separate contributions of the Bugs are fused together perfectly. Sanderson's edgier guitar work is demonstrated on 'Slow Along the Wire', a 90-second miniature of trembling angst.

File this alongside the estimable Snatch Paste compilation LP and we have an emerging picture of the Storm Bugs / Snatch Tapes aesthetic. There may not be much of this material available, but Sanderson and Ball are to be commended for the very inventive ways in which they explored their ideas, and they have rendered unique visions of the psychic underside of England, visions as palpable as the monochromatic photograph (by Ball) on the back cover which celebrates the horrors of suburbia with an enquiring eye.