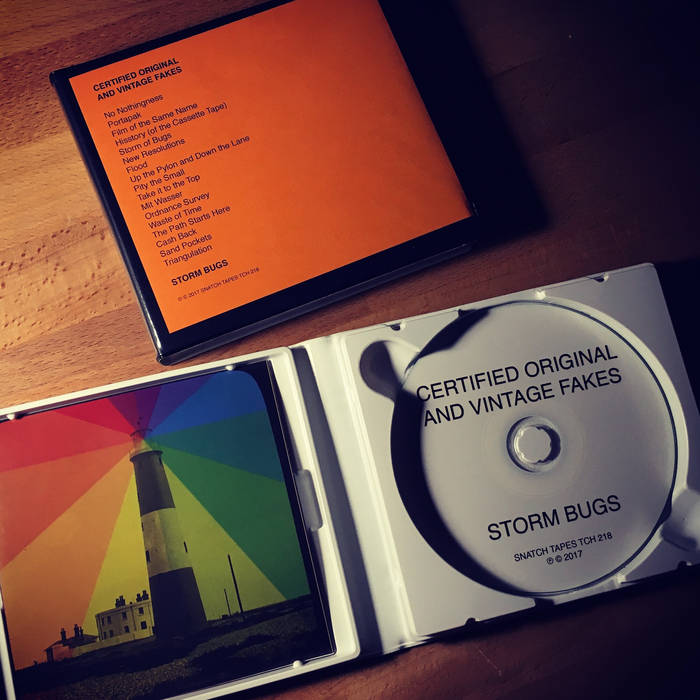 Gavin Hellyer Hard to describe this really. I hear shades of English 'New Romantic' disintegrating right in front of you, and at other times bits of solo Brian Eno circa 'Here Come The Warm Jets' & 'Taking Tiger Mountain(By Strategy)', and then there's the rest of it. Fascinating record. Favorite track: Hisstory (of The Cassette Tape).

The title's a giveaway, or rather, as ever with Storm Bugs, a gentle messing with your head. The songs on Certified Original were composed by veteran DIY tape manglers Philip Sanderson and Steven Ball through a process of back and forth fuckery, with backing tracks crafted by Sanderson, vocals and effects added by Ball. Initially released as 'dingles' (download singles) in 2016, together the tracks start to make a weird and wonderful kind of unhinged sense.

The touchstone for much Storm Bugs work is Eno - a lot here recalls the odder moments of Before And After Science and Another Green World. The Britishness of Ball's vocals is also key - somewhere between conversation, confrontation and the steady robocalm of an emergency announcement. Every texture surrounding the vocals on tracks like the sublime "Hisstory Of The Cassette Tape" and "No Nothingness" is impure, fucked with, open to derailment, squirrelling with demented detail and digital detournement, sometimes holding the beautiful melodies up to the light, sometimes obscuring them in thrumming motorik pulses of Cabs-style electro grind, sometimes diving into pure delight with music Oliver Postgate would have understood instinctively.

The Medway locale where the pair first met clearly still resonates - this is waterlogged, groggy music, neck-deep in aquatics, its foot flailing for the riverbed. The unique place that they arrive at- both bucolic and urban, serious and playful, utterly modern (the lyrics could only have been written in the last two years) and strangely timeless, that makes your listening querulously held between immersion and being deeply suspicious about whether SB are telling you the truth about their means of production. Songs seem so imbued with an analogue dub feel you find yourself trapped between ravishment and paranoia. If this album is an act of playful deceit (old tapes with new words), well played. If not, as a suite of digi-derangement it plays beautifully. Welcome back, nutters.

The legendary Storm Bugs are respected old-timers residing, a bug apiece, on the South Coast and Deptford (Borough of Lewisham). Somehow this shared maritime history, pebbled-dashed openness, wide skies and neat beaches seem to run through their infectious sound.

Certified Originals is a very helpful drawing together of recent ‘dingles’, downloadable singles that play with the seven inch format in a variety of delightful ways: the three-minute pop song, the dub version, the unexpectedly superior b-side all get shoved through the Storm Bugs’ intelligent blender.

For the uninitiated get ready for SONGS…catchy verse, chorus, verse songs with real words and underpinning ideas. But like This Heat or something these songs all get twisted into new forms creating bold statements that weave through their deceptively dark synth-pop exterior. Make no mistake – the sweet exterior always reveals a soft-centre of something unpleasant and darkly acrid.

Starting off gently there’s no nostalgia on ‘Hisstory of the Cassette Tape’ as it playfully pokes at both collector-scum and sepia-bores. And of course there are bonus points for rhyming “Cassette Tape” with “Ferrous Oxide bake.”

A bewildered diary entry ‘New Resolutions’ marches like a Roman Legion with the type of buzzing synth-sound EL-P loved to chuck into CoFlow jamz. The ghost of Esquivel squirms through ‘Up the Pylon and Down the Lane’ but in a sickly sinister nursery rhyme.‘Pity the Small’ takes me right back to those minor-key symphonies perfected by New Zealand’s Tall Dwarves but here laced with suicidal thoughts.

And this darkness reaches a peak on ‘Take it to the Top’ a discombobulating mash-up of the ‘Are You Being Served?’ theme with a Class War manifesto.

Gosh! I need a bit of a sit down after that.

The instrumentals are measured as carefully as posh cocktails – a snitch of vermouth, a splash of bitters – so while tracks like ‘Storm of Bugs’ could have fallen out of an Art of Noise remix 12 inch way back when Morley was a mere annoyance, ‘Ordnance Survey’ is, without a doubt, a mosh-pit breakdown.

Wondering what 60’s corn-pop tune Popcorn would sound like full of acid squelches? Clear out your lugs for ‘MitWasser’.

These kindly Bugs don’t want you to leave this disc a wreck so they save the slick beats and hummus-rich atmosphere of ‘Triangulation’ until last; a strangely euphoric piece that started to claw-back my faith in human nature and throw a few shapes around the living room.

Consumers! Satisfaction is yours to demand. Order a Storm Bugs solution – NOW.